Reconstruction work in the church is now complete. The celebration of Mass and the Sacrament of Reconciliation have moved back into the church.

Scroll down to read more or to watch footage of the ceiling collapse and updates on construction of the new ceiling. 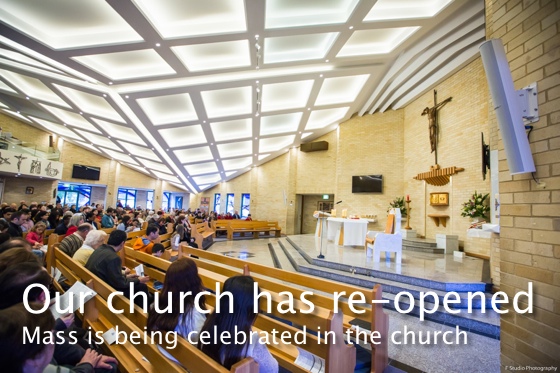 On the 13th of August 2013, part of the ceiling of St. Bernadette’s church collapsed. Fortunately no one was injured as a result of this. For safety reasons, the church was closed with the celebration of Mass being moved to the Parish Hall as a temporary place of worship. It was decided that, to ensure the integrity of the ceiling, the entire ceiling would be rebuilt, with the roof also being replaced. This extensive work has been ongoing since late 2013. The celebration of Mass returned to the church on the 14th of June 2014.

You can watch the previous updates on this work below (beginning with early June 2014):

Work in the church is in its final stages. Following the completion of electrical work, the new carpet and the pews will be installed. It is anticipated that the church will re-open on the weekend of the 14th/15th of June 2014 (Feast of the Most Holy Trinity).

Work in the church is continuing, with the ceiling mostly complete. There is still a significant amount of electrical work that needs to take place. New carpet will need to be laid and the pews reinstalled before the church is re-opened, which is now expected to be late May.

Work to restore the church’s ceiling is nearing completion. Following completion of the ceiling, there will be work to setup lighting and the A/V system, and work to lay new carpet before reinstalling the pews. This video contains more footage from inside the church during April 2014. It is expected that the work will be completed by the end of April.

Work continues to restore the church’s ceiling. The new roof has been installed. This video includes more recent videos of this work from inside the church during February 2014.

Work has begun to restore the church’s ceiling and install a new roof. This video includes photos and videos of this work from inside the church in mid-January 2014. Work is expected to be completed prior to Palm Sunday (13th April).

On Tuesday the 13th of August 2013 just after 1.00pm, part of the ceiling of St. Bernadette’s Catholic Church collapsed. Mike Fagan addressed parishioners at all Masses on the 1st Sunday of Advent (30 Nov/1 Dec) 2013 to provide an update as to what needs to happen to restore the church’s ceiling.